Random Thoughts on Writing and Photography

I shot these photos with my Voigtländer Nokton Classic 40mm f/1.4.

I used my Sony A7 Full Frame mirror-less camera. Both make a terrific combination together. 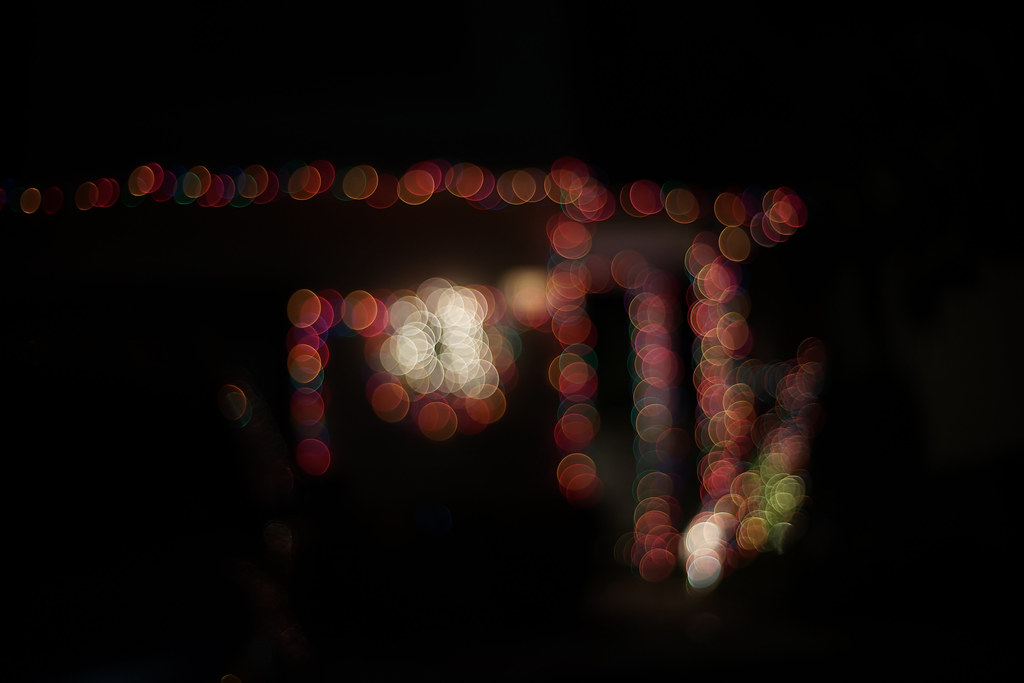 There was an image on flickr which inspired my imagination to get this lens (solely for the ability of this lens to create hollow orbs of light when the sources of light are thrown out of foucs).

So last week I found the perfect opportunity to go out at night around my neighborhood and shoot the Christmas lights in the dark, of some of my neighbors houses. I wanted to get it in before they took down the decorations.

It seems to be an excellent setting to shoot this type of effect. You have multicolored points of light in the dark, creating a dazzling array of orbs of light which is quite nice.

The basics here needn’t be covered, but I’ll still mention them for the novice. You need to put your lens at the closest focus point (as far away as possible from infinity, the opposite most spot on the focus scale), and then open the aperture to the maximum. Both of these actions on your lens will create the most amount of de-focusing of distant objects. This is the desired effect here. Focus as close as possible, and reduce your depth of field to the shallowest.

The trick I rapidly discovered, was to expose only for the lights, and not for anything around the lights, in fact, if you can black out the surroundings, you’ll get a singular effect.

I started out with -1.0 exposure compensation in Av (aperture priority mode), and then switched to -3 stops. And later I went to Tv (shutter priority).

And while keeping fairly low ISO of 100 or lower, I just made the shutter faster. Fast enough to darken everything but the lights, but not so fast as to choke out any light from getting to the sensor at all.

It’s more of an art. You have to learn by doing. And you need to be aware of all the controls on your camera and what impact each one has on your image. It’s a fun little exercise. 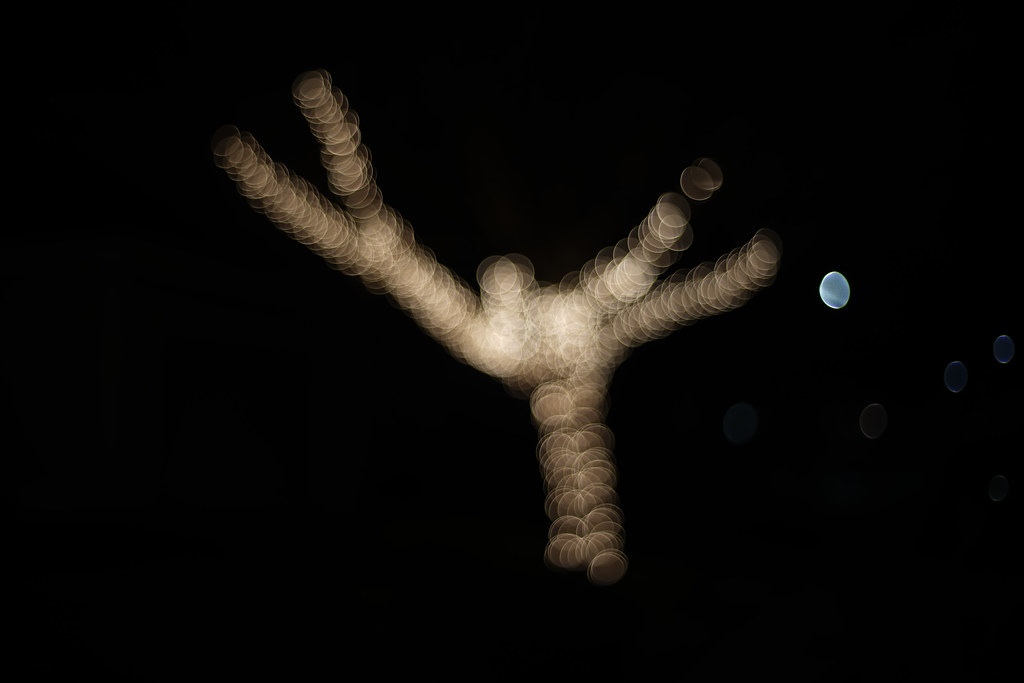 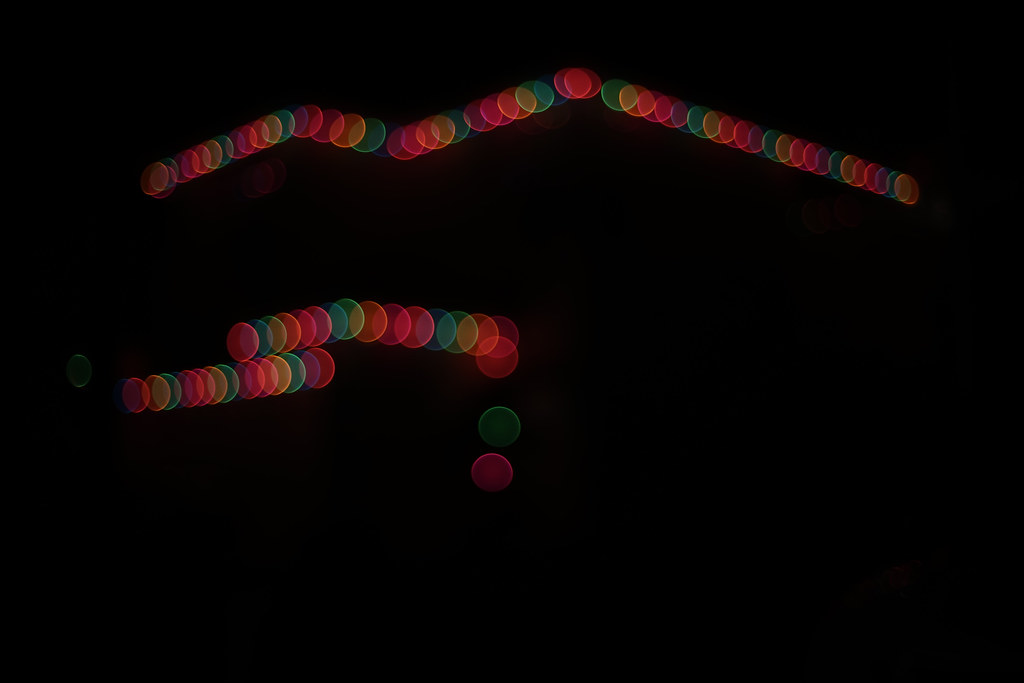 Outline of a House 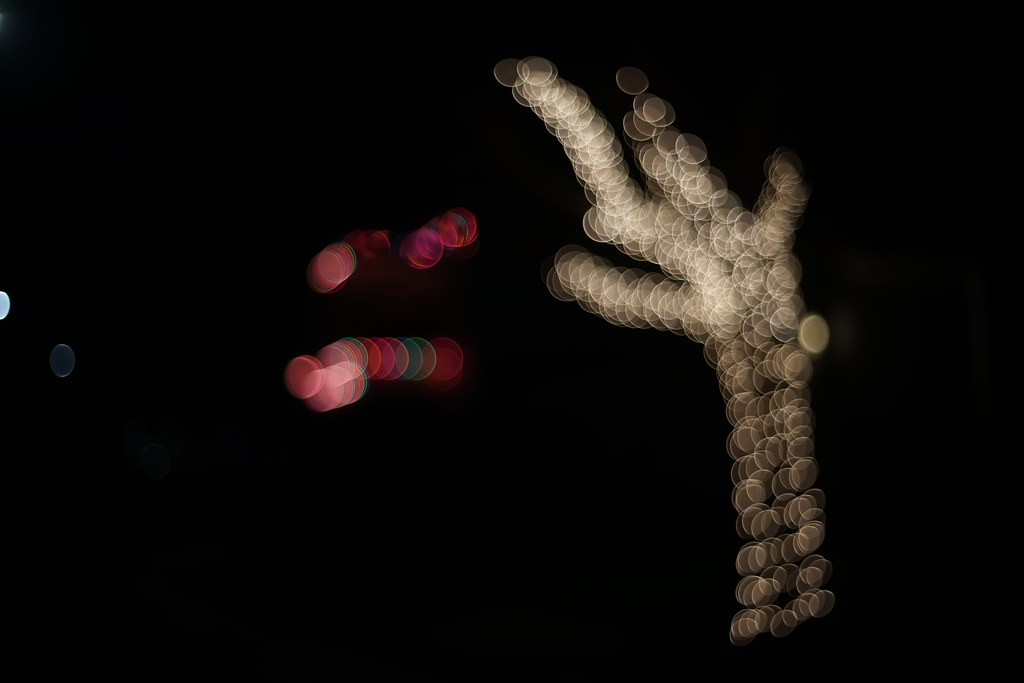 Tree and House together 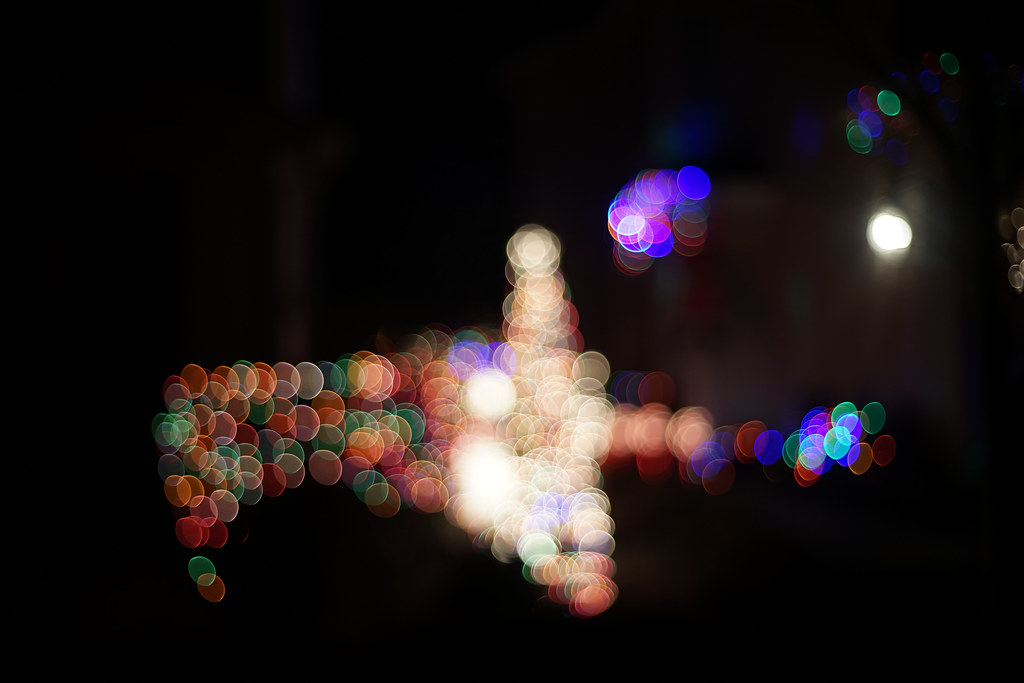 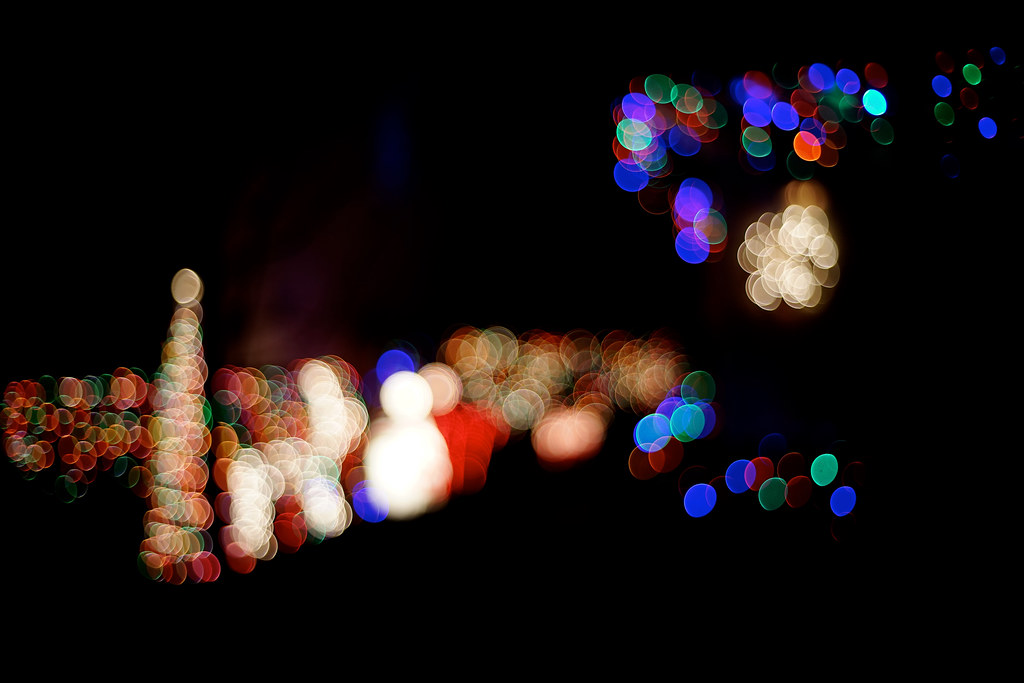 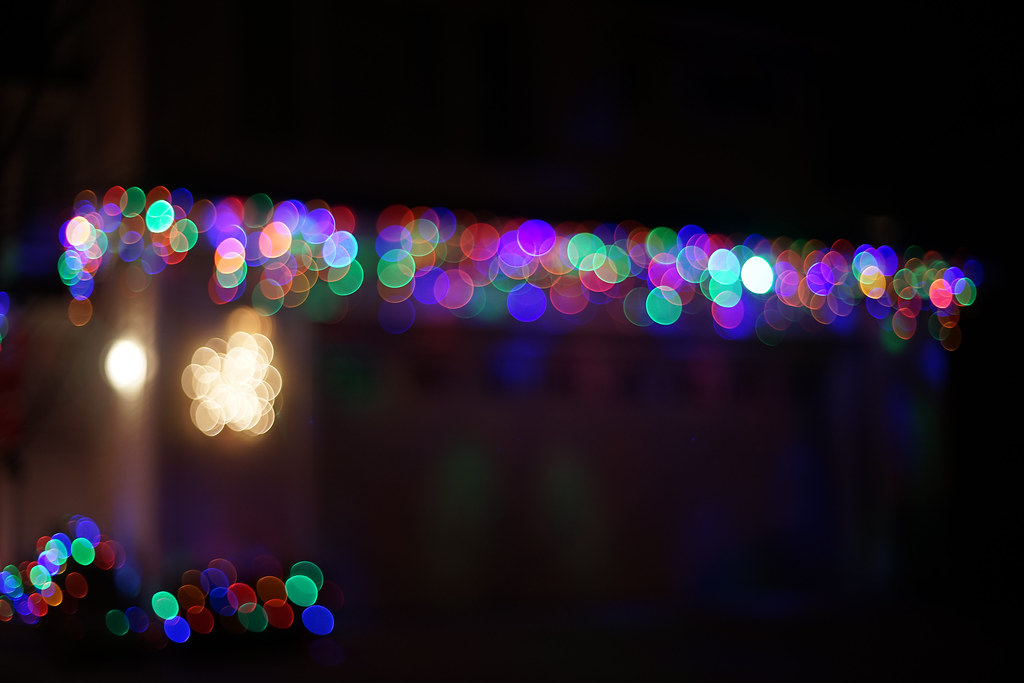 Comments about the lens:
The 40mm f/1.4 Voigtländer Nokton Classic is a neat little lens. It’s very well built, all metal construction. It’s fairly small in size, and the f/1.4 maximum aperture is a real treat.

I haven’t made up my mind yet whether the 35mm focal length is my favorite or the 50mm. Sometimes I capture really nice keeper shots with my 50mm lens, and at other times the 50 confounds me because it’s too narrow.

This 40mm perspective seems to be a nice middle ground between the two.

There are plenty of pundits out there who fail to see the point of this lens. Purely because it’s a Leica M-mount lens and most leica cameras don’t have brightline viewfinder framelines for the 40mm focal length.

I guess Voigtländer made this lens with the intent to be used with the Minolta CLE body which is an M-mount rangefinder camera which does in fact have viewfinder framelines for the 40mm focal length.

My intent for getting this lens was never to use it on any of my Leica bodies, but rather, to use it on my Sony gear by means of an M-mount to E-mount adapter.

This lens performs quite well even at the largest apertures. I’ve been quite happy with it. The color rendition is superb, there may be slight fall-off at the corners but I kind of like that effect and don’t consider it a minus.

The focus ring has a tab which makes it very easy to change the focus with one finger and not taking your eye off the view finder. The focus ring as well as the aperture ring travel very smoothly and they are a joy to operate.

This lens does come in two versions. Single coated (S.C.) and Multi coated. Mine is the latter version I believe.

The single coated version is identical to the multi coated version in all other respects except one (obvious) difference: it has only single coating on its glass. The end result is that the images from the S.C are more contrasty and have more dynamic range, and therefore the lens is better suited for black & white photography.

The only one gripe I have about this lens is that I cannot get very close to objects with this lens. The closest focus distance is 0.7 meters, which doesn’t let you get very close and take shots of things like food or other items. And as you move further away to achieve focus, you get a lot more in your image than you want to (because of the 40mm focal length).

I have some macro focus attachment filters which I’ve been thinking about using on the front of this lens. The close focus macro attachment filters from Nikon which screw on to the standard 52mm thread diameter (I will write a blog post about that in the future).

The filter thread diameter on this lens is 43mm in size, so with the aid of a step ring to go from 43mm to 52mm thread size, I was easily able to attach the two. I haven’t used it very much in this way, yet. But the initial testing revealed the expected loss of DOF with the increase in magnification. It becomes super shallow to where you will find it difficult to hand-hold your shots.

I keep repeating this, but overall, I’m extremely pleased with this lens. The size the weight, the solid construction.

If you have experience with this lens or actually own one of these, I encourage you to share your thoughts in the comments below. I’d love to hear your opinions.